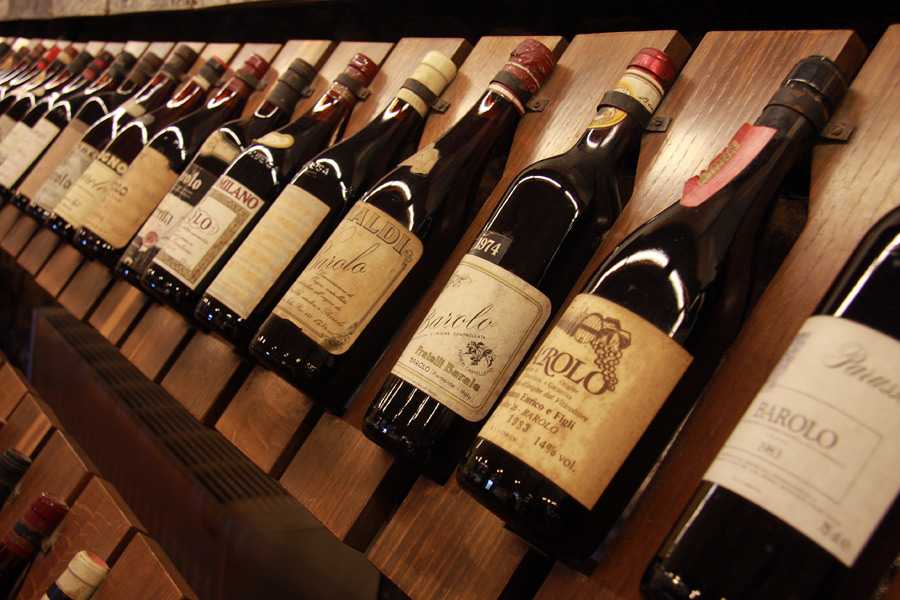 The area of Barolo includes 11 Communities such as La Morra, Barolo, Serralunga, Castiglione Falletto, Monforte and Verduno.
Nebbiolo is the only vine species permitted by docg regulations for production standards (appelation of controlled and guaranteed origin).
The vineyards are found  between 200 and 450 metres above sea level and mostly faces south,  to take advantage of the best exposure . The appelation of controlled and guaranteed origin of Barolo wines and reserves can be followed by one of the additional geographical mentions sub-area of production known as French cru; among these Cannubi, Brunate, Cerequio, Bussia, Ginestra, Bricco del Fiasco, Monprivato and Vigna Rionda have a good name. The producers members of the register of cultivators of nebbiolo for Barolo.

Barolo is characterized by ample and complex aromas that with ageing can recall red berries, liquorice, tobacco, spices and a wide range of scents which make it one of the most prestigious wine world wide. It is easy to be strucked by the astringent sensation provoked due to the abundant tannins. The proof is rather important, between 13 and 15%.
Barolo gives its best when it is 10 to 30 years old. Barolo harmonically matches with red, braised and ground-game meat; as well as simpler dishes, from first courses to young cheeses.

The first witnesses regarding the use of the name Barolo go back to the 18th Century, when it was written about Barol in correspondences between the Savoy ambassador in London and various English merchants. The true birth of Barolo can  be dated back to the years of Risorgimento (Independence wars), when Juliette Colbert, Tancredi Falletti’s wife, experimented with Nebbiolo vinification in the cellrs of the Castle Faletti di Barolo.
The marchioness was friend with Camillo Benso of Cavour thanks to whom the marchioness obtained Louis Oudart’s collaboration, wine merchant, oenologist, consultant at Castle of Grinzane Cavour. In this way, beginning with nebbiolo grapes and following new French winemaking techniques, the history of Barolo was born.
By the end of the 19th Century Barolo began to be distinguishable even on foreign markets, taking part in international competition and winning important recognition.

The first decade of the 20th Century was marked by productive development which was brought to its knees both by the war and by the arrival of the phylloxera, a vine parasitic which destroyed almost all of European vineyards in late 1920s.

A great success world wide arrive in 1966 with the award of D.O.C. wine. It became one of the elite Italian wines in 1980 with the DOCG disciplinary. Nowadays, qualified producers such as Rinaldi, Barale, Conterno, Bruno Giacosa, Pira and Mascarello joined Alba’s renowned companies like Fontanafredda, Borgogno, Pio Cesare, Prunotto, and Marchesi di Barolo. Today, bottles of Barolo are contended by collectors and wine lovers and they are one of the best ambassador of Italian wine greatness all over the world.