This route crosses the production area of Dolcetto and Barolo and enables the visitor to find out quaint little country towns where charming quiet sceneries are a backdrop to art. 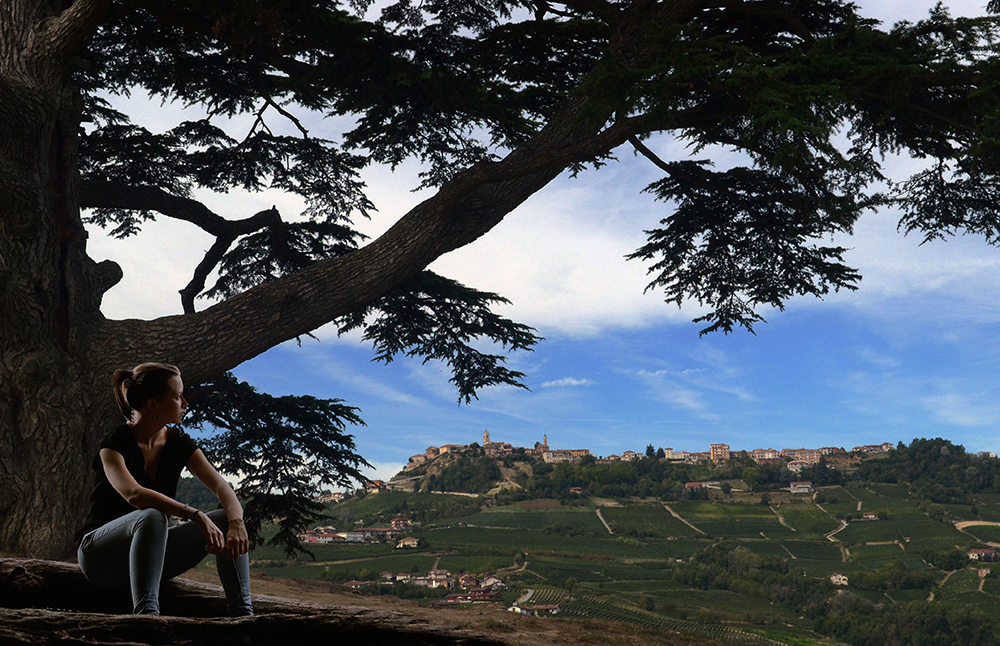 This route crosses the production area of Dolcetto and Barolo and enables the visitor to find out quaint little country towns where charming quiet sceneries are a backdrop to art. It is tailored to those who love silence and tranquility and look for relief from the summer heat.

Perched on a hilltop, Montelupo has a cemetery peculiarly located on a steep slope and a Baroque church overlooking a wood of chestnut. The name Montelupo comes from a legend according to which the place used to be inhabited by wolves.
On the upper part of the town there was the castle of the Earls Rangone, a well known ancient Piedmontese family that boasted among their members the architects Carlo Francesco and Carlo Emanuele Rangone, both Earls of Montelupo.
Montelupo lays at 564 m asl. On clear days the Western  Alps  (peaks:  Matterhorn,  Monte Rosa and Monviso) are the background of beautiful sceneries of cheering green hills.

Rodello is perched along the ridge of a green hill where the air is fresh and the weather cool. The view is soothing. These are probably the reasons why Rodello became a well known resort for tourists and people who need a rehabilitation period.
There is no evidence left of an ancient castle which overlooked the square where the Town Hall is located.
The church of the Immaculate Conception (1749) is called by locals “the lower church” in order to make a distinction between the Immaculate Conception and San Lorenzo’s church, of course, “the upper church”.

Driving along the main road you will get to Sinio, a quaint little town perched on a hilltop overlooking the green Talloria Valley. Sinio features San Frontiniano’s church and the ruins of a medieval castle (now private). Since the 17th century  the Disciplinati’s Confraternity church is owned by the municipality which converted it into a theatre after decades of disuse.
The exciting night walks organized by a local association during the summer nights are a perfect way to explore the area and find out beautiful ancient votive chapels recently refurbished. On All Witches’ Night (“Notte delle Masche”), 14th August, the town sinks into mystery and magic: you should not miss the party.

Along the road to Roddino, from Pedaggera upwards the landscape is strewn with green pastures, pine woods and chestnuts, and large hazel groves. Pedaggera is on the border between Lower and Upper Langa.
Roddino is perched on a hilltop surrounded by Dolcetto and Nebbiolo vineyards. In ancient times the Via del Sale crossed the town. The trade of salt was carried on between Piedmont and Liguria along the same road that today gets to Roddino and Pedaggera.
The town was part of the Marquisate of Saluzzo. Unfortunately, there is no evidence left of the ancient castle because in the 15th century Santa Margherita’s church was built in its place. The church was refurbished and enlarged in 1928, when a peculiar bell tower was built next to the church. It boasts a beautiful marble stoup which used to be used as a font and dates back to 1499.
The most ancient building in Roddino is located in Corini: Santa Margherita’s chapel features a Romanic apse that dates back to the end of the 11th-beginning of the 12th century.

After catching a glimpse of the Upper Langa, drive downhill to Monforte, which is part of the Langa of Barolo.
The historic part of the town was built around the castle along picturesque narrow cobbled streets. On top of the hill the 18th century palace of the Marquis Scarampi del Cairo overlooks, together with the bell tower, the beautiful descending piazza. The Romanic bell tower testifies to the existence of an ancient medieval church that was knocked down at the beginning of the 20th century.
The descending piazza was converted into an open-air auditorium dedicated to Vladimir Horszowksi, the pianist who inaugurated it in 1986. The Scarampi palace and the bell tower together with Santa Elisabetta’s Baroque oratory, the façade of the Disciplinati Bianchi’s church, the surrounding hills and the Alps far in the distance are the backdrop to the picturesque auditorium.
Take the street on the right side of the square and beware of the ghosts that are said to inhabit it. According to tradition, the wailing and moaning come from the poor souls of the Cathars who used to live in the area a thousand years ago.
Well worth a visit is the church of the Blessed Virgin “della Neve” (of the Snow). It is an impressive Neo-Gothic church (1908-1912) frescoed by a well-known local painter, Luigi Morgari.
Do not miss a visit to quiet Perno and Castelletto, two towns surrounded by vineyards, castles and country chapels.