The strongly vertical Castle of Serralunga d’Alba rises on the amazing landscape of Langa, in the very heart of Barolo wineyards and landscape. 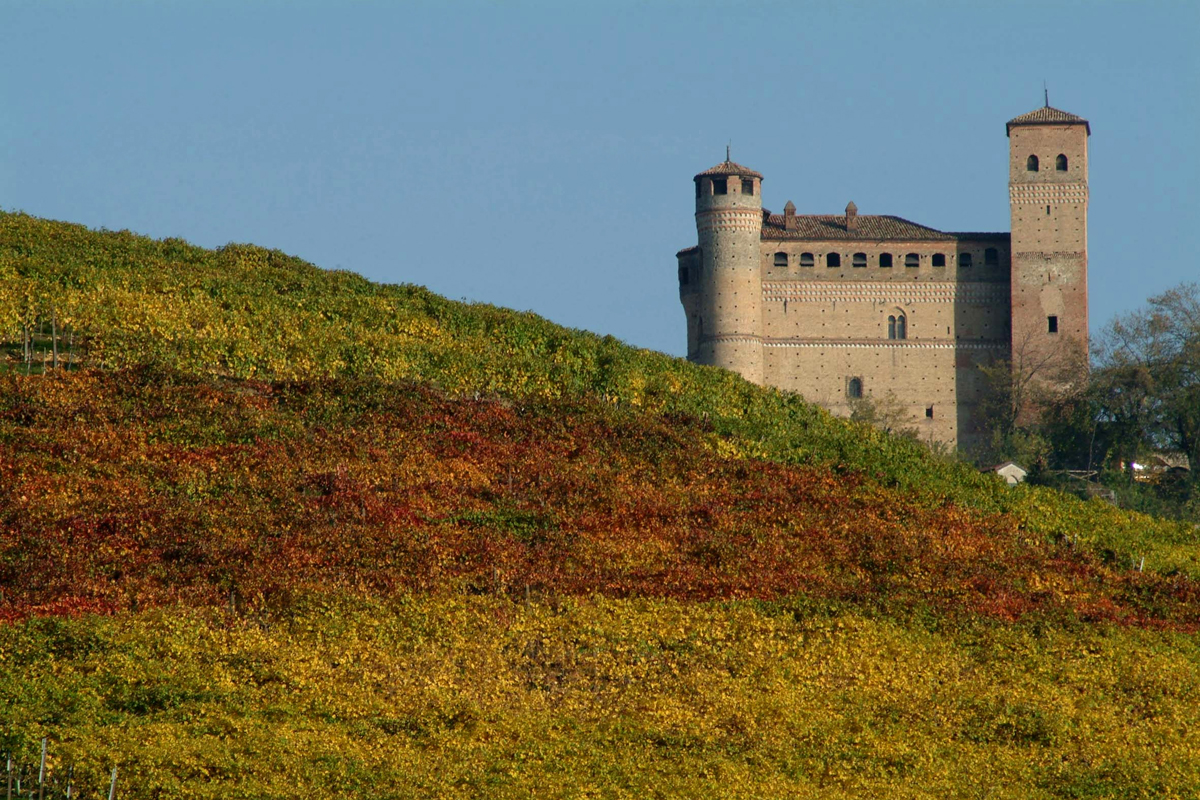 A tower defended the village of Serralunga in the XII century, when Bonifacio Minore e Ottone del Carretto (the descendants of Bonifacio del Vasto) were the owners of the place. From the beginning of the XIII century on a living center under the family Falletti became an important productive center. After having   obtained the Marquis of Saluzzo’s part of the feud of Serralunga as a reward for his military engagement, in 1340 Petrino Falletti began to build the new castle.

Adding Serralunga to their numerous possessions, the five brothers Falletti became important characters in the geographic and politic situation of Piedmont across the XIV century.

The Castle of Serralunga d’Alba was built around 1340 and 1357 and it represents a unique example in Italy from the point of view of its architectural structure, because it is a French Donjon. It was not as important from the military point of view as it had an important role in the control of the local productive activities. This is shown by its strongly vertical structure, which underlined the prestige and richness of the family Falletti during the XIV century.

From the second half of the XIV century the new owners used the Castle of Serralunga d’Alba both to live in and to practice their power.

The building consisted of different parts: the Palacium, a cylindrical tower on the north-west side, a turret on the opposite side and a little barrel-vaulted chapel with XV century frescos in it.

The “Salone dei Valvassori” (the hall of vavasours) is the main hall of the castle and it is decorated with the XV century frescos of the chapel, which represent the Martyrdom of Santa Caterina d’Alessandria, San Francesco on the bottom wall and Agnus Dei on the lower part.

The castle was never transformed into a vacation residence, so it kept its medieval stronghold structure unaltered for ages. During the XIX century many scholars were interested in the Castle of Serralunga d’Alba, which later became a national monument protected by the State.

In 1949 the association “Opera Pia Barolo” (which was created by Giulia Falletti, the last descendant of the family Falletti di Barolo) sold the castle to the State. During that period the castle was renewed.

In the village you can visit the parish dedicated to San Sebastiano, which was built in 1886-1888 and Fontanafredda, which is only 6 km away from Serralunga.

The description of the Castle of Serralunga d’Alba is in collaboration with www.castellilangheroero.it.